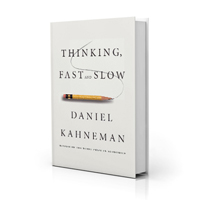 In 2002, Daniel Kahneman won the Nobel in economic science. What made this unusual is that Kahneman is a psychologist. There have been many good books on human rationality and irrationality, but only one masterpiece.

In the highly anticipated Thinking, Fast and Slow

, Kahneman takes us on a groundbreaking tour of the mind and explains the two systems that drive the way we think. System 1 is fast, intuitive, and emotional; System 2 is slower, more deliberative, and more logical.

System 1 can’t be switched off. Its operations involve no sense of intentional control, but it’s the secret author of many of the choices and judgments you make. It is System 1 that detects hostility in a voice and effortlessly completes the phrase “bread and…”

System 2, in Kahneman’s scheme, is our slow, deliberate, analytical and consciously effortful mode of reasoning about the world. It is System 2 that swings into action when we have to fill out a tax form or park a car in a narrow space. Kahneman and others have discovered that there is an easy way to tell how engaged a person’s System 2 is during a task: just look into his or her eyes and note how dilated the pupils are.

System 1 proposes, System 2 disposes. So System 2 would seem to be the boss, right? In principle, yes. But System 2, in addition to being more deliberate and rational, is also lazy. And it tires easily. Too often, instead of slowing things down and analyzing them, System 2 is content to accept the easy but unreliable story about the world that System 1 feeds to it. According to Kahneman, System 2 is the source of many of the biases that infect our thinking. System 1 jumps to an intuitive conclusion based on a “heuristic” — an easy but imperfect way of answering hard questions — and System 2 lazily endorses this heuristic answer without bothering to scrutinize whether it is logical.

According to Kahneman, optimists are more psychologically resilient, have stronger immune systems, and live longer on average than their more reality-based counterparts. Moreover, exaggerated optimism serves to protect both individuals and organizations from the paralyzing effects of another bias, “loss aversion”: our tendency to fear losses more than we value gains.

Engaging the reader in a lively conversation about how we think, Kahneman reveals where we can and cannot trust our intuitions and how we can tap into the benefits of slow thinking. He offers practical and enlightening insights into how choices are made in both our business and our personal lives—and how we can use different techniques to guard against the mental glitches that often get us into trouble. Thinking, Fast and Slow will transform the way you think about thinking.

Reviews on Thinking Fast and Slow, by Daniel Kahneman

“My main problem in doing this review was preventing family members and friends from stealing my copy of the book to read it for themselves…this is one of the greatest and most engaging collections of insights into the human mind I have read” William Easterly, Financial Times

“Absorbing, intriguing…By making us aware of our minds’ tricks, Kahneman hopes to inspire individuals and organisations to identify strategies to outwit them”, Jenni Russell, Sunday Times

“Profound . . . As Copernicus removed the Earth from the centre of the universe and Darwin knocked humans off their biological perch, Mr. Kahneman has shown that we are not the paragons of reason we assume ourselves to be”, The Economist

“Thinking, Fast and Slow is a masterpiece – a brilliant and engaging intellectual saga by one of the greatest psychologists and deepest thinkers of our time. Kahneman should be parking a Pulitzer next to his Nobel Prize”, Daniel Gilbert, Professor of Psychology, Harvard University.

“In this comprehensive presentation of a life’s work, the world’s most influential psychologist demonstrates that irrationality is in our bones, and we are not necessarily the worse for it”, 10 Best Books of 2011, New York Times

9 questions to discover if you need to hire a Property Manager
What is a buyer's, seller's and neutral market and how is it like in the UK?
Scroll Up