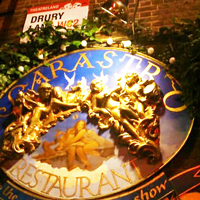 Named after a character in Mozart’s ‘Magic Flute’, Sarastro restaurant opened in 1996.

Appropriately located in the heart of Theatreland, in what was once a public house on Drury Lane, Sarastro quickly established itself as one of London’s most unique and must see restaurants.

On first approaching, the eye is enchanted by the voluptuous floral displays which adorn the exterior of this Grade II listed Victorian building. The interior of Sarastro is as imaginative and remarkable as a scene from The Arabian Nights.  The main floor is surrounded on three sides by 10 distinctive opera boxes based on English, Gothic, Rococo, Ottoman and Byzantine styles, whilst the exclusive and prominent ‘Royal Box’ commands the centre position at the far end.

Sarastro is also the first restaurant in London to feature balconies, with bannisters taken from the Royal Opera House.

The founder, Richard Niazi, was known locally as the ‘King of Covent Garden’ and Sarastro was his greatest achievement in over 50 highly successful years in the catering industry. To this day Sarastro continues to offer a heady mix of fun, food and music. Referred to by many as ‘The Show After The Show’, Sarastro hosts its own special musical events on different days of the week. 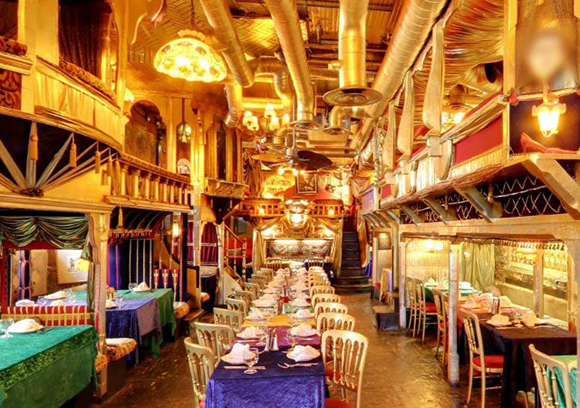 During lunchtime and evening, Sarastro comes into its own with magical live performances by a string quartet and opera singers. Shows commence at 2.30pm and 8.30pm with a suggested reservation time of at least half an hour before the start time.

When there is live music, bookings of less than 6 must order a minimum of 2 courses per person from the a la carte menu or dine from the Set Menu. Bookings of 6 or more people shall only be served the Set Menu.

At Sarastro, the menu is Turkish oriented and broadly Mediterranean in style. A two-course meal with wine can cost as little as £20, with £25-30 being the average. Menus are regularly posted on the website along with details of special events and themed evenings.